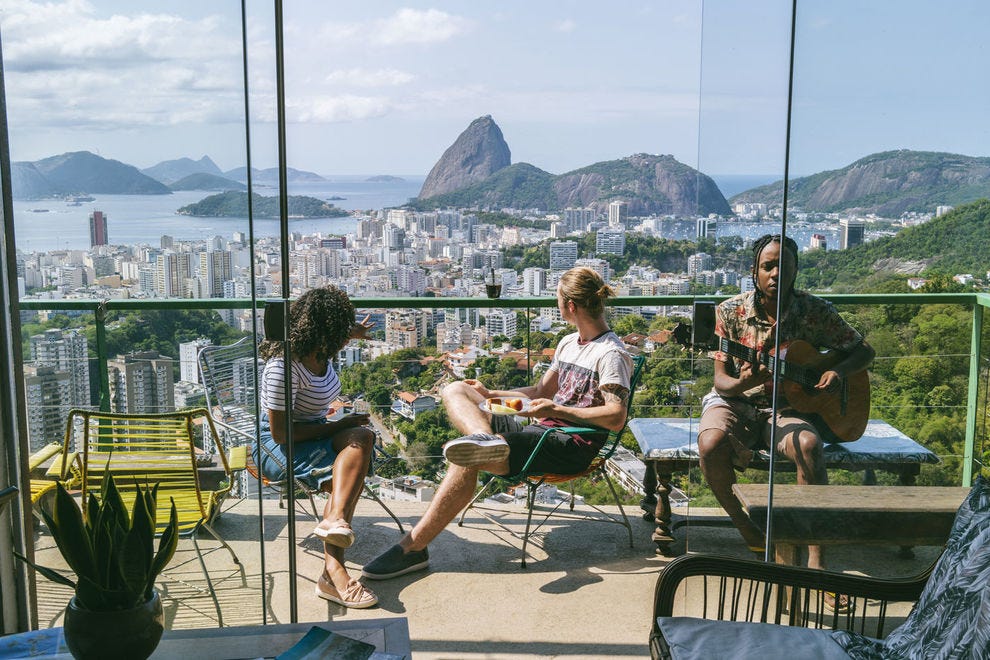 Look at Rio de Janeiro from just about any angle, and it’s easy to see why it’s nicknamed the Cidade Maravilhosa. Surrounded by tropical mountain landscapes and white sand beaches, this city of over six million people enjoys views known the world over and a joie de vivre that’s hard to match. 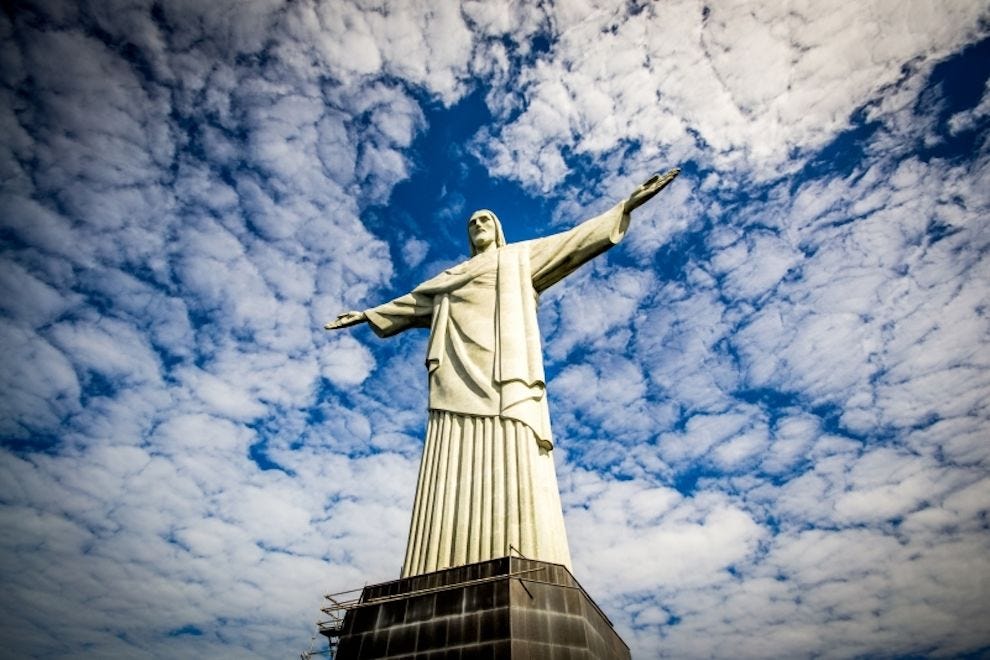 Wonder of the Modern World

This Art Deco statue of Jesus, designed by French sculptor Paul Landowski, towers over the city and ranks as one of Brazil’s most iconic and immediately recognizable attractions. Between the statue and its pedestal, Christ the Redeemer stands right at 125 feet tall, and its position atop Corcovado Mountain means it gets struck by lightning several times per year. 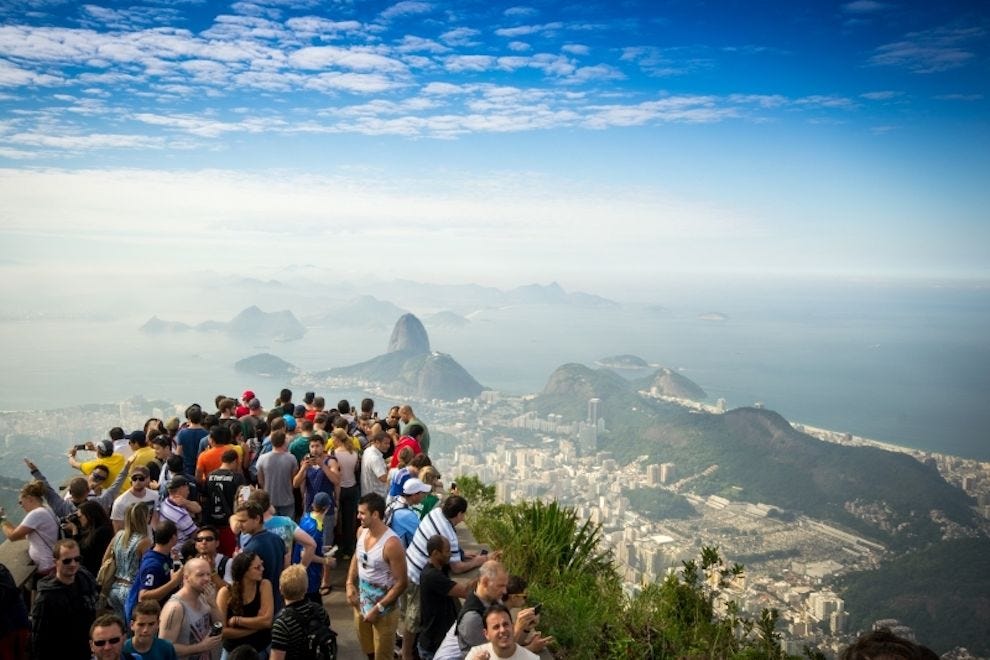 Even if it weren’t for the statue, Corcovado would still be a major attraction thanks to its spectacular views over the city below from the peak around 2,300 feet. 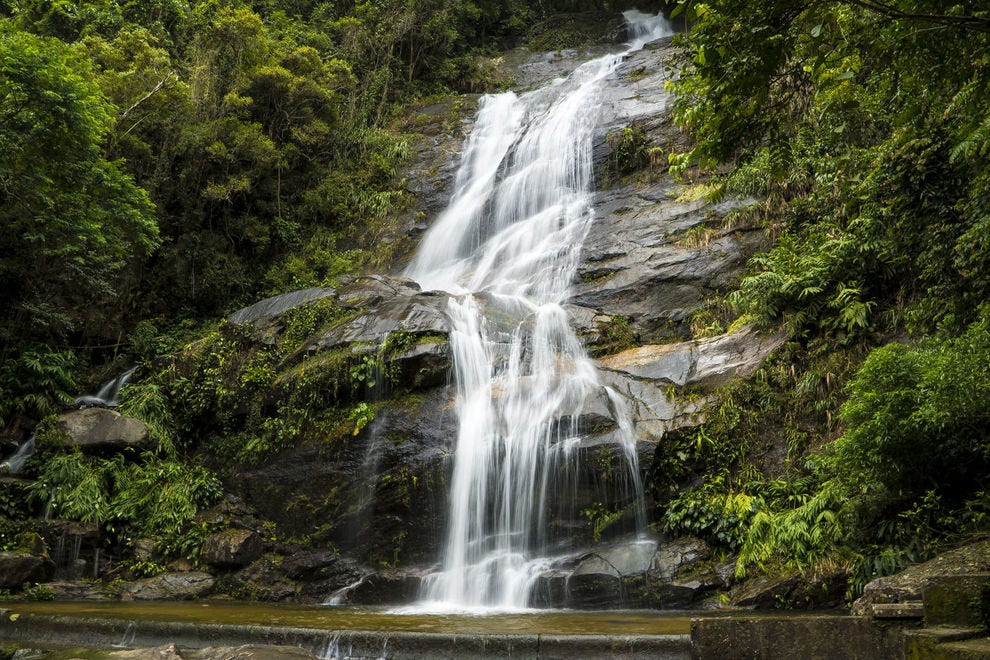 Rio has the world’s largest urban rainforest on the planet right at its doorstep. Tijuca National Park covers some 8,300 acres of forest, granite peaks, waterfalls and more than 350 animal species. 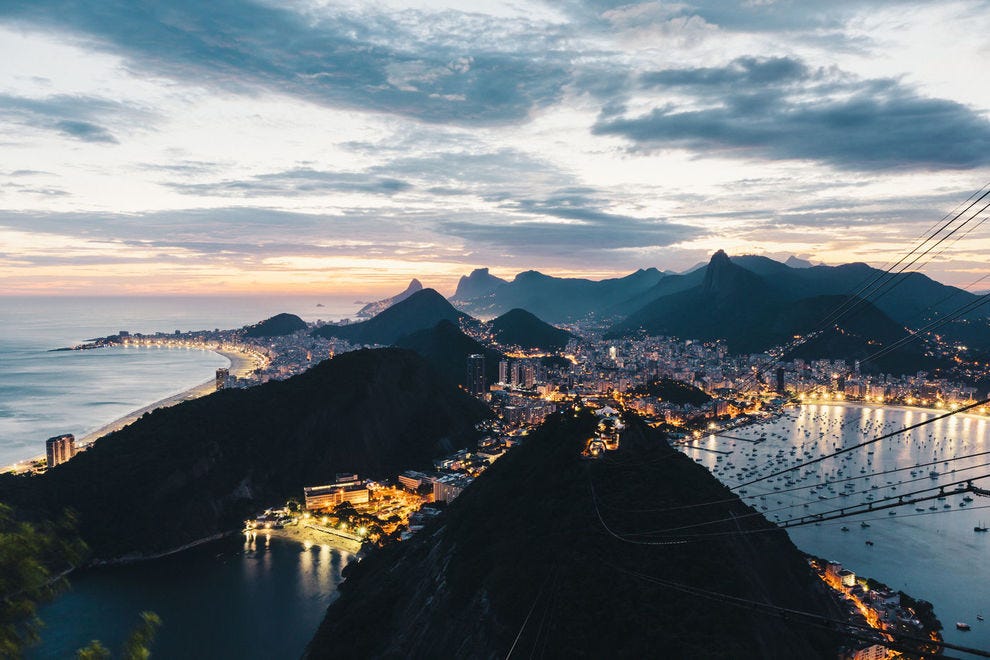 Top of the world

Rio has no shortage of scenic viewpoints, and the top of Sugarloaf Mountain (Pão de Açúcar) provides one of the best. Two cable cars take visitors to the summit, where the views extend to Christ the Redeemer and Copacabana Beach. The view is always excellent, but sunset tends to be the best time. 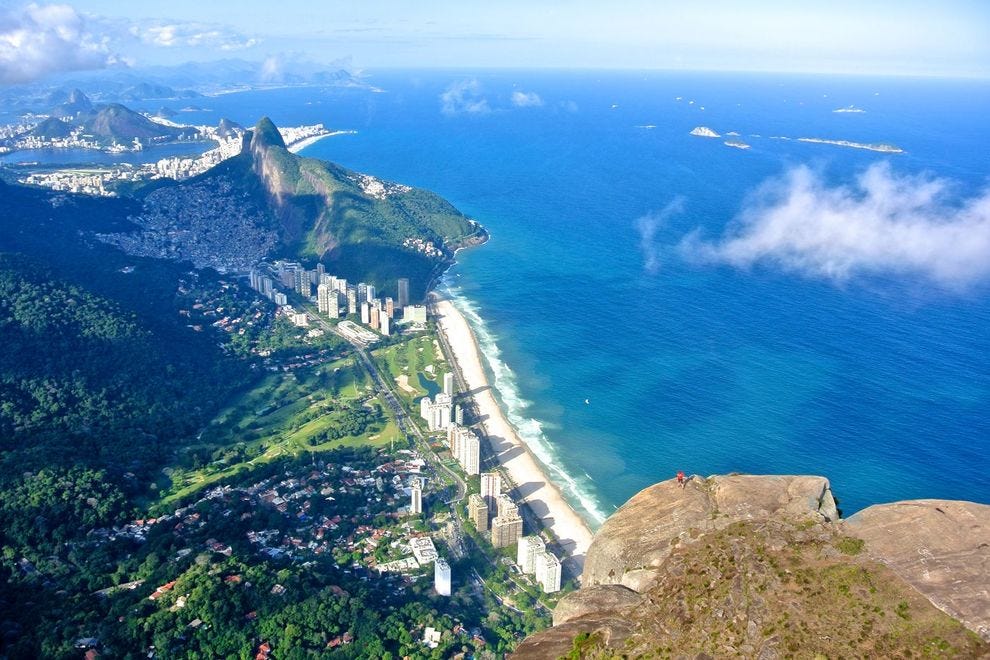 Pedra da Gávea is Brazil’s largest coastal monolith, with a summit at 2,769 feet. Even though it’s taller than Corcovado and Sugarloaf Mountain, it’s less famous. Those who make the challenging hike to the top will be rewarded with one of the city’s best views and photo ops. 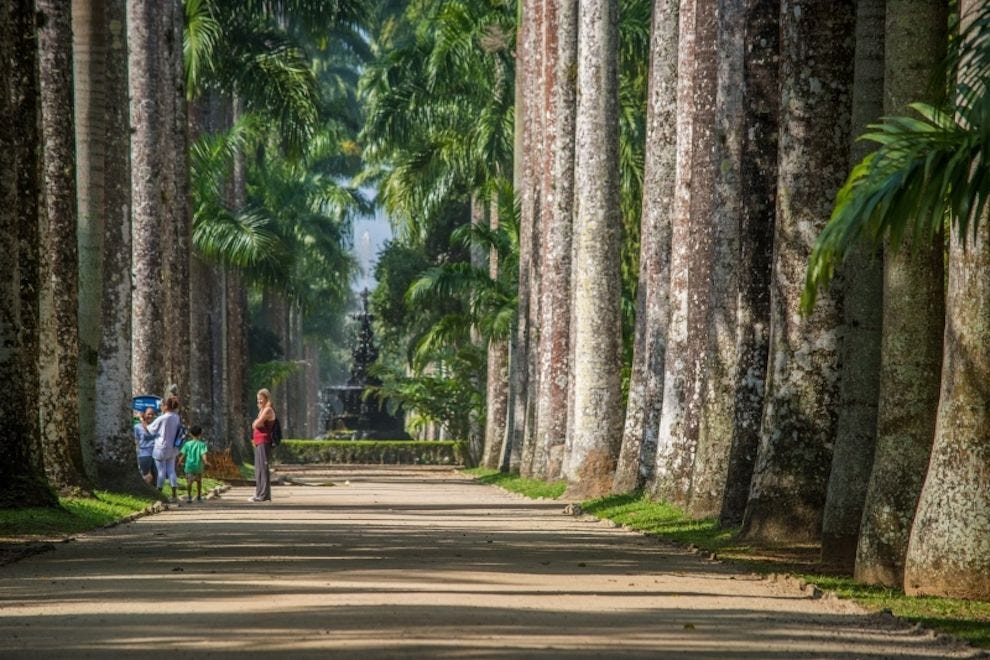 Walk in the garden

Rio de Janeiro’s Jardim Botânico was founded in 1808 and remains one of the world’s great botanical gardens and arboretums. Spanning several hundred acres in all, this green space is best known for its collection of bromeliads, orchids and old trees, such as this row of palms planted when the garden was first opened. 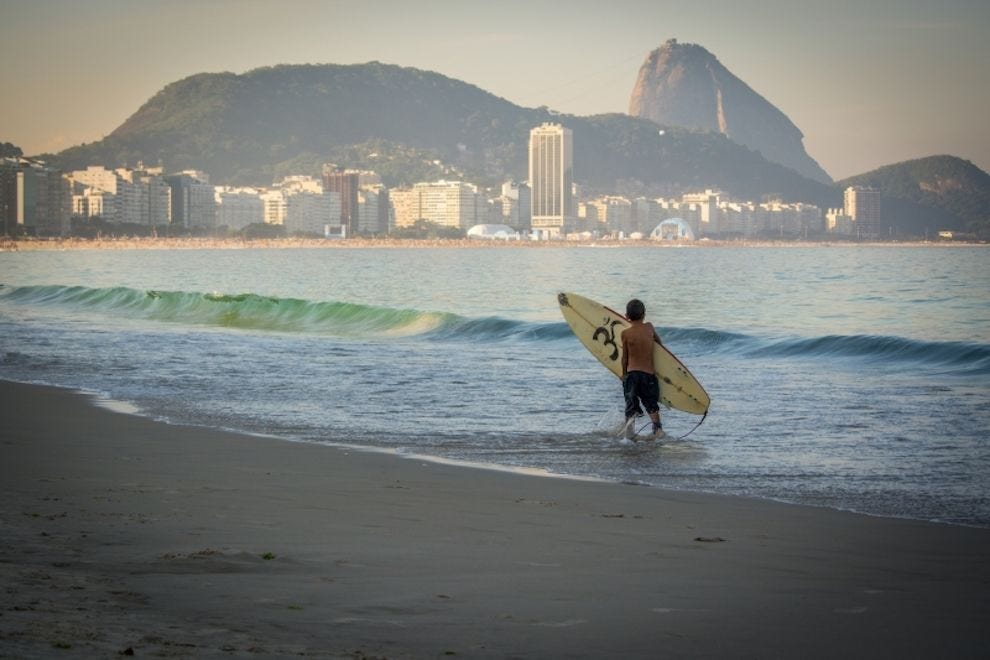 Among Rio’s many beaches, none is quite as famous as Copacabana. The 2.5-mile stretch of sand attracts cariocas and visitors alike to swim, surf, sun or play soccer or beach volleyball in the sand. 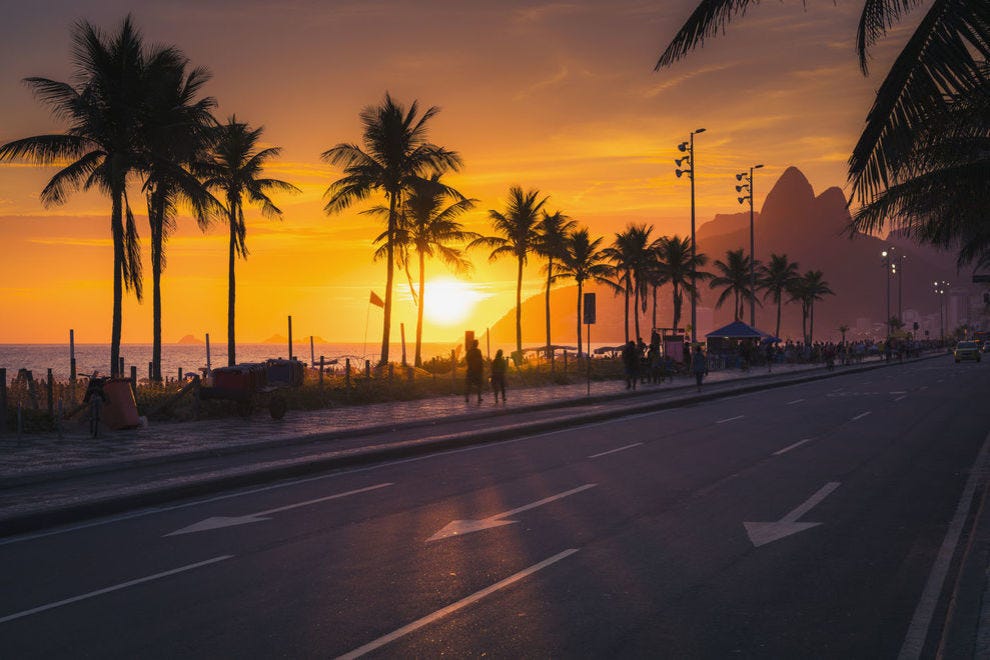 Perhaps equally famous is Ipanema (captured in its own song by Antonio Carlos Jobim). Each section of sand, demarcated by posts, serves as a meeting spot for one of the city’s many subcultures, from the local surfers and hippie types at Posto 7 to the LGBTQ hangout at Postos 8 and 9 to the wealthy youth at Posto 10. 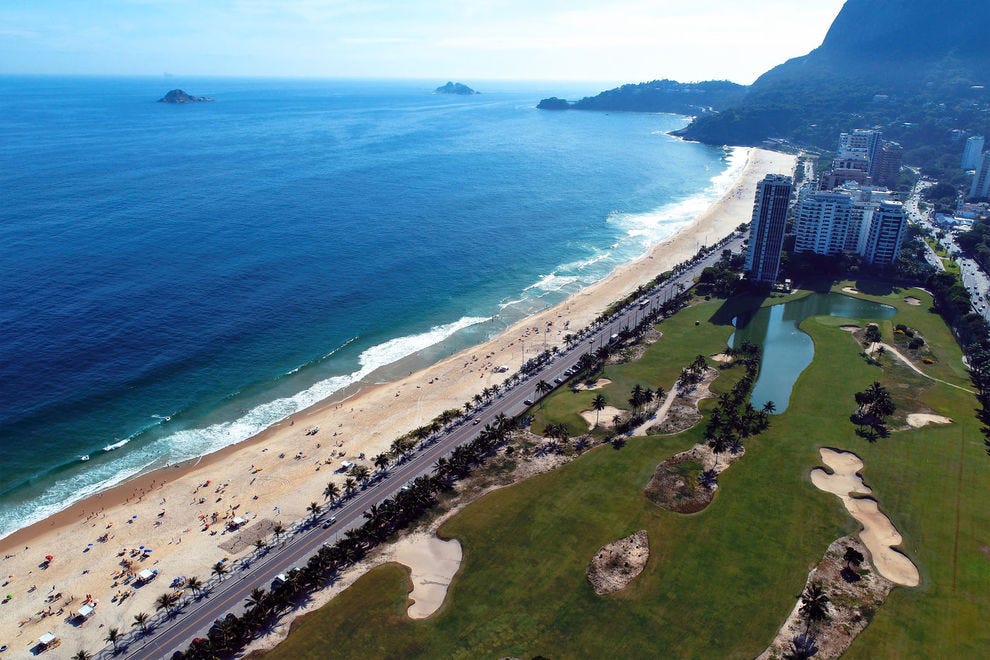 For an escape from the crowds of Rio’s more iconic beaches, pull up a beach chair on the 11-mile stretch of sand known as Barra da Tijuca Beach, or Barra for short. This beach, the longest in the city, is popular among surfers, windsurfers and kite surfers. 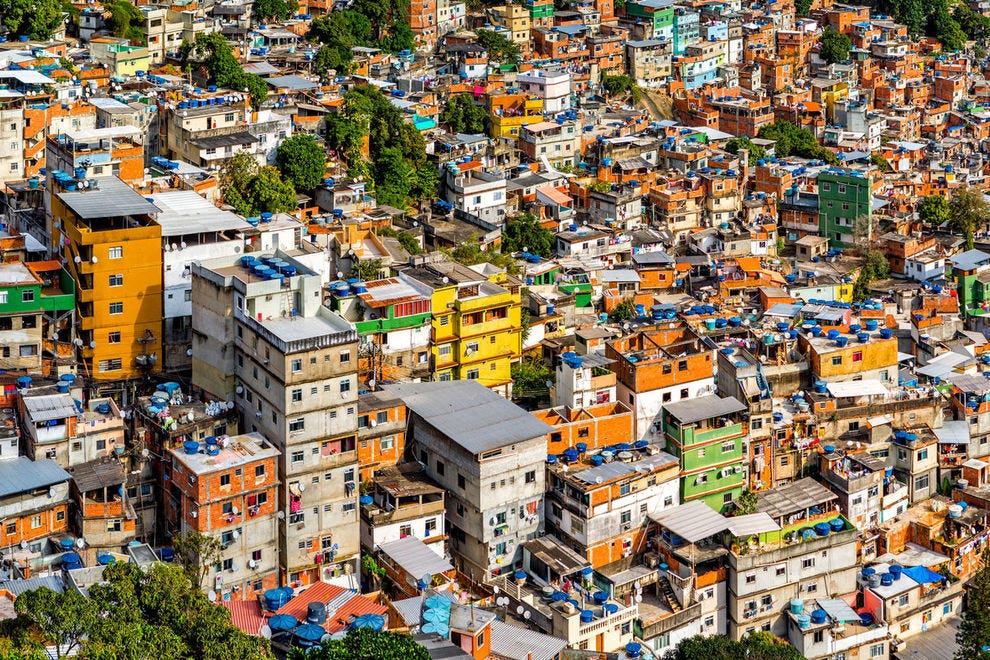 Somewhere around 100,000 people live in Rocinha, Brazil’s largest favela.  Built on a steep hillside overlooking the city, the colorful neighborhood shows a less-polished but equally vibrant side of Rio. 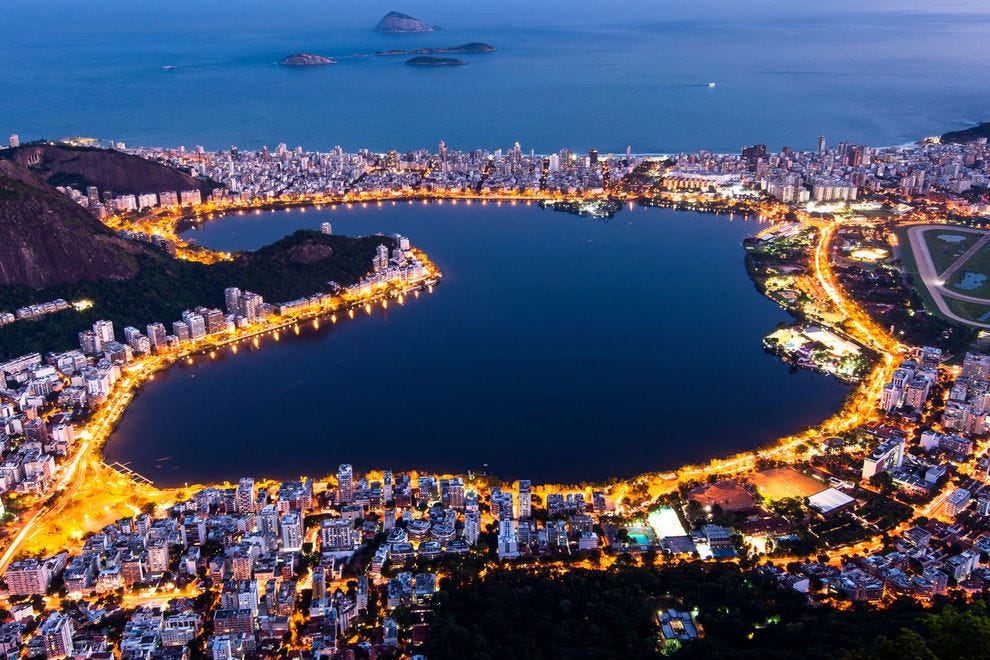 The city of Rio is not only blessed with beautiful beaches but a scenic lagoon as well. A walking and cycling path encircles Lagoa Rodrigo de Freitas, while the calm waters host paddle boats and stand-up paddleboards. Several lakeside kiosks mix up caipirinhas for sipping and people watching. 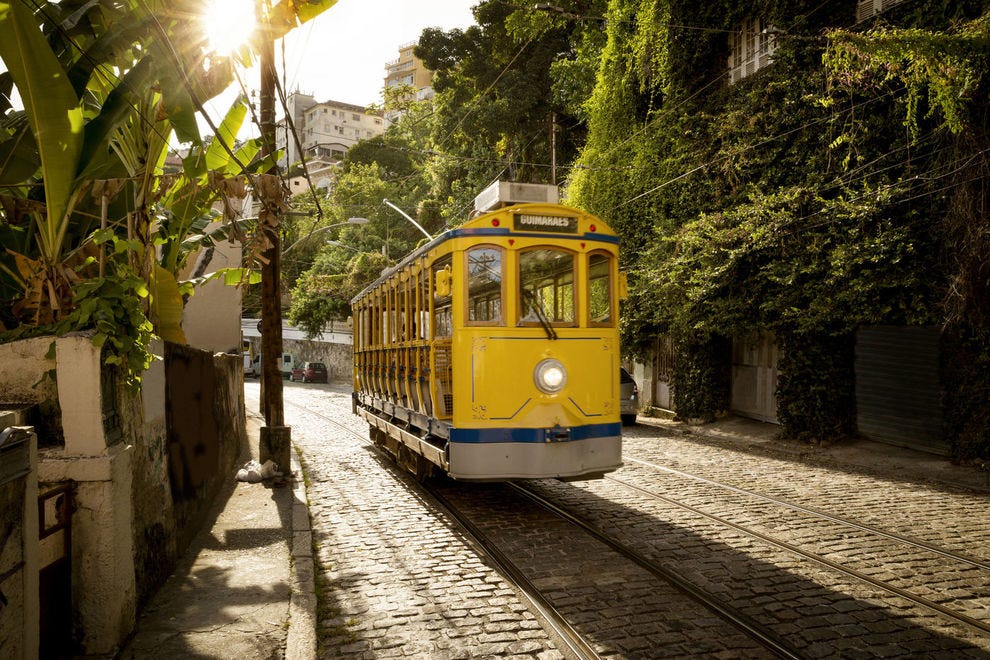 The hilltop neighborhood of Santa Teresa ranks among the most charming in the city, thanks in large part to its cobbled streets, collection of artists studios and overall bohemian vibe. A historic yellow tram – the oldest electric railway in Latin America – takes passengers from the city center to Santa Teresa. 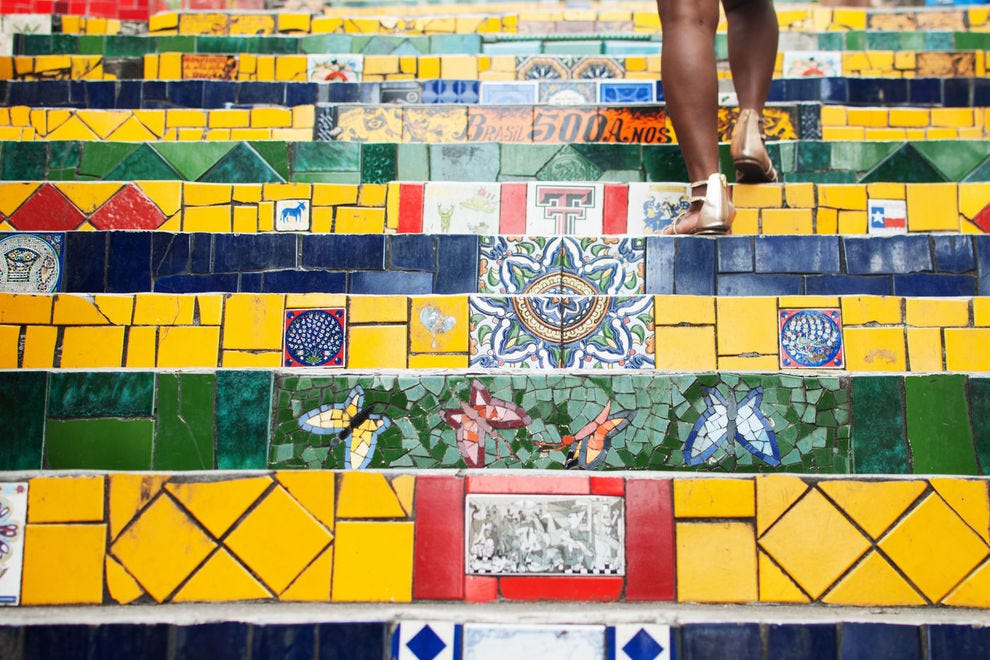 Tribute to the Brazilian people

Santa Teresa is also home to one of Rio’s most photographed attractions, the Escadaria Selarón. This iconic flight of stairs is the work of Chilean artist Jorge Selarón, who covered them in bright mosaic tiles collected from around the city and donated by visitors from around the globe. 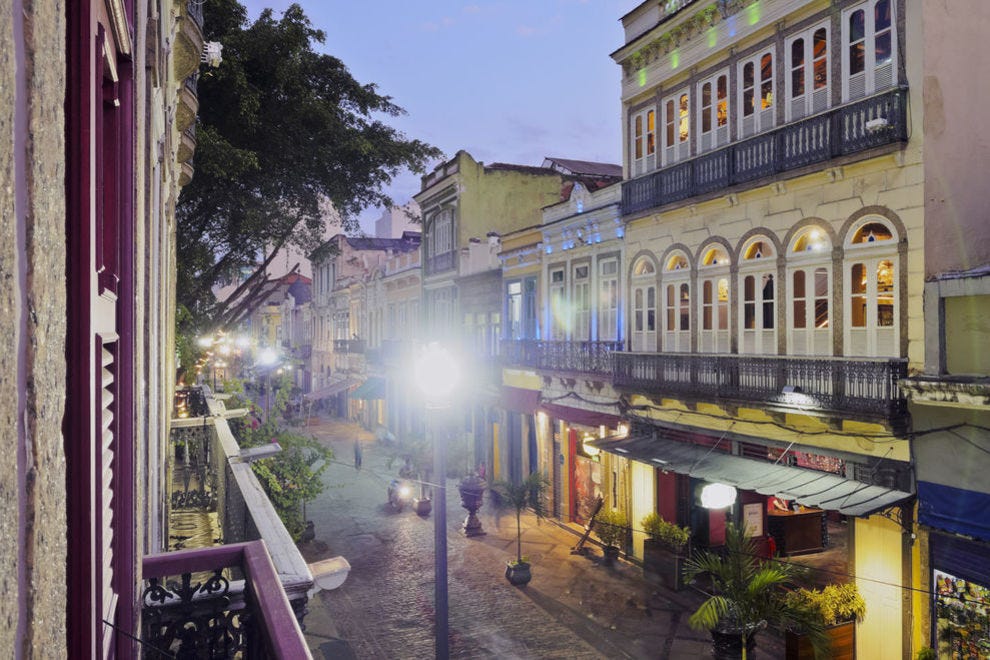 Bordering Santa Teresa is the downtown neighborhood of Lapa, where colonial buildings house live music venues with sounds of samba spilling out onto the streets. To party like a local, it’s hard to beat Lapa. 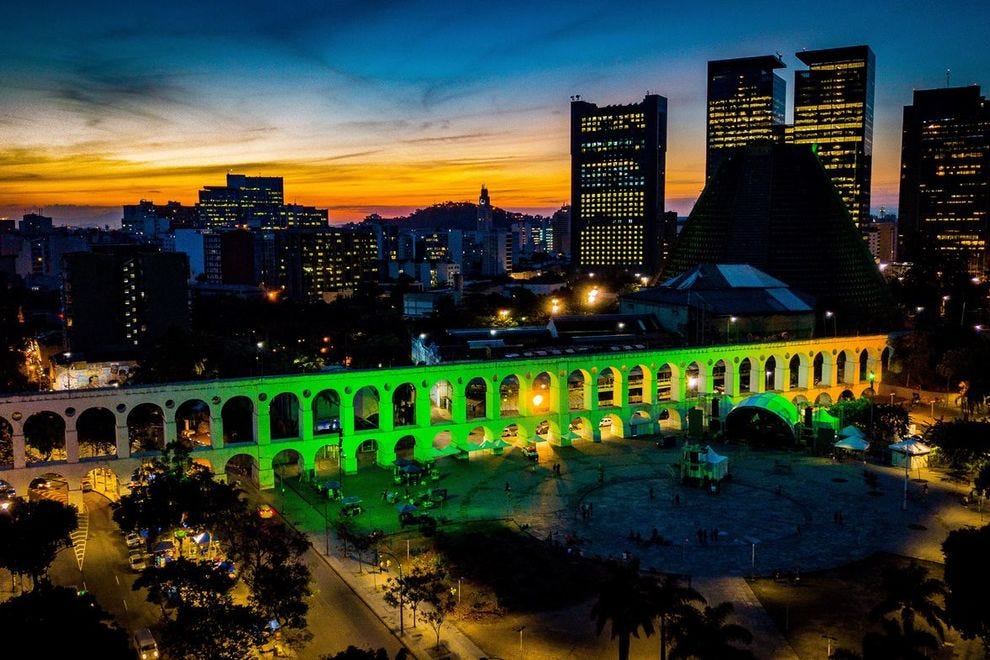 The 18th century Lapa Arches serve as a gateway to historic downtown Rio. The structure originally served as an aqueduct to bring water from the Carioca River to downtown residents. Today, the arches support a cable car between Santa Teresa and Centro. 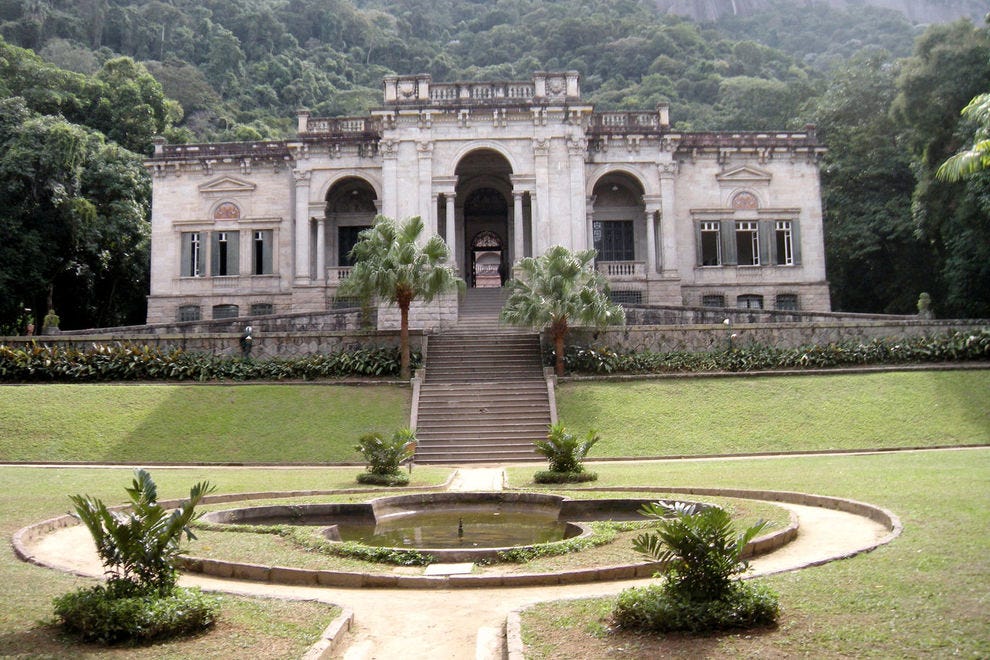 Parque Lage, one of Rio’s most scenic green spaces, comprises English-style gardens, ponds and an old mansion that houses free art exhibitions. Since it’s a bit off the typical tourist route, it’s often quiet – an excellent spot to grab a cub of coffee or glass of wine in the shade. 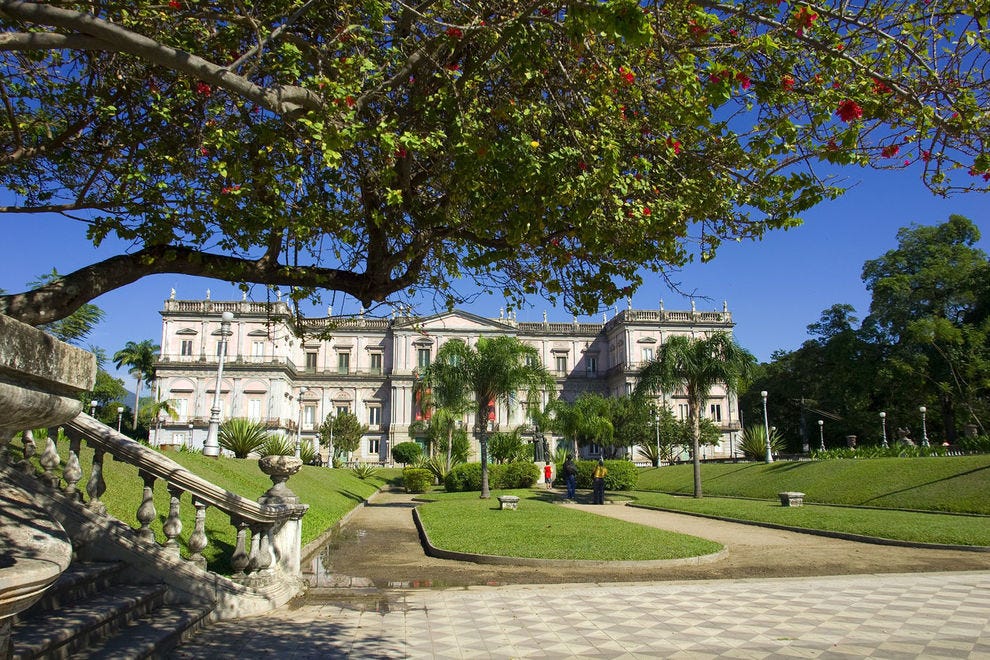 Quinta da Boa Vista, the former estate of the Portuguese imperial family, is today a busy public park in the Zona Norte. A 2018 fire destroyed much of the former imperial mansion, but the green space remains a popular spot for picnics and weekend soccer games. 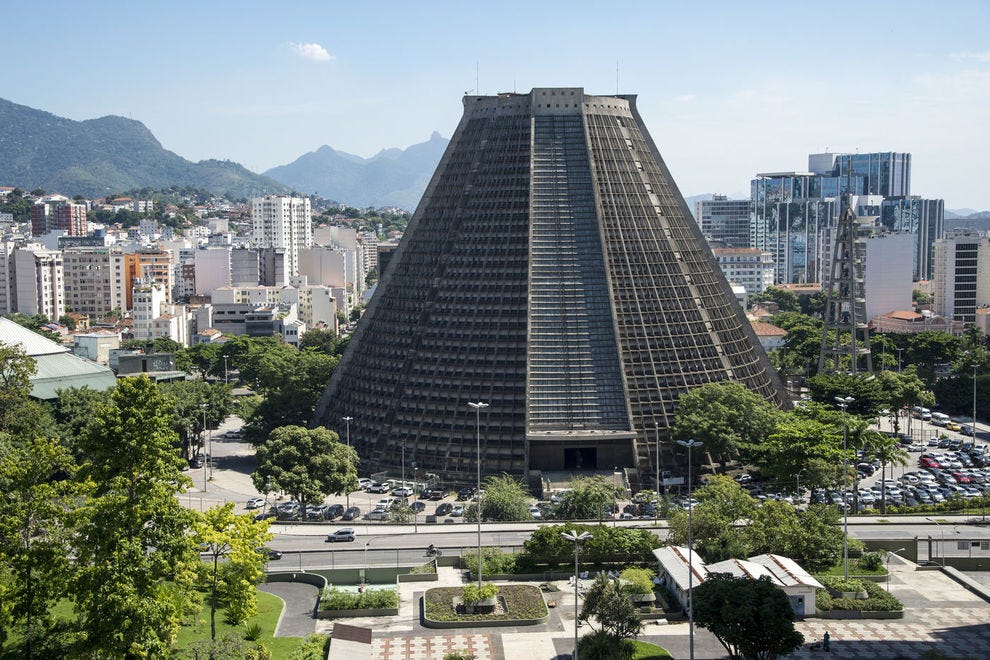 Not your typical church

Rio’s Metropolitan Cathedral, the seat of the Roman Catholic Archdiocese, is dedicated to Saint Sebastian, the patron saint of the city. The striking building was constructed in the 1960s and 1970s from a design by Edgar de Oliveira da Fonseca inspired by a Mayan pyramid. 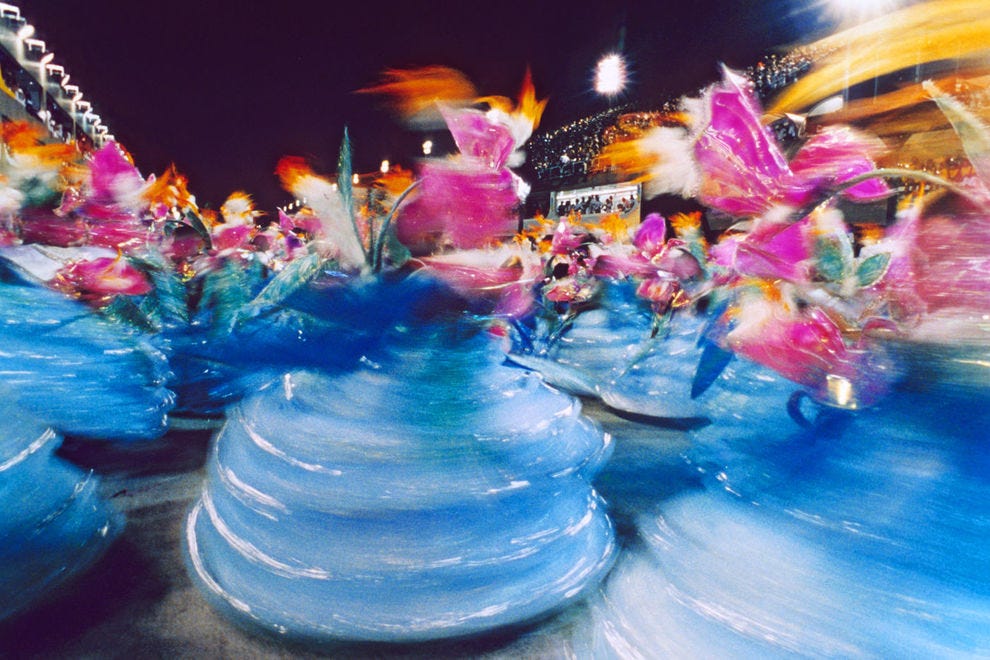 Each year in the lead up to Lent, some two million people take to the streets each day during Rio’s biggest street festival, Carnival. The city is home to more than 200 samba schools who come together to decorate the city and participate in elaborate parades.