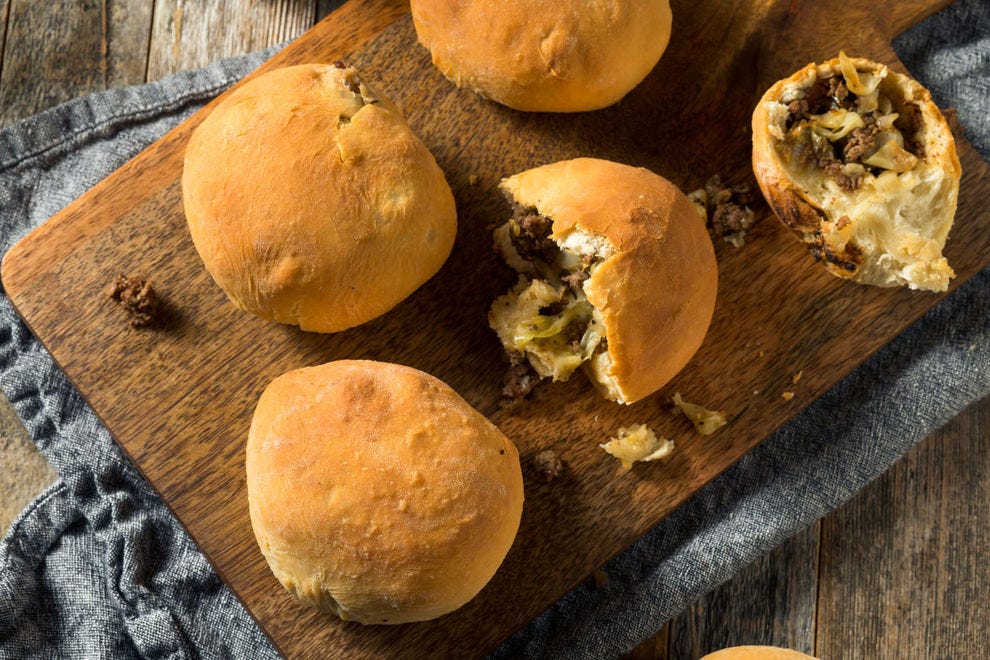 It sounds like a heavy metal festival, but around Wichita, Kansas, a “bierock” is meant for the peckish. Swaddled in a thin layer of dough, the hand-sized bread roll houses a German wonderland of ground beef, cabbage, onion, spice and brown mustard.

Bierocks are delicious and, as meat pockets go, super cute too – something like a miniature manatee you can eat (relatively) guilt-free. But interestingly, this “German snack” never graced an oven in Germany. Not historically. To try one, you have to go to the Great Plains.

“The first I heard of bierocks was when we opened our food truck and people started asking for them,” says Manu English, a German native from Rheinland Pfalz who runs Wichita’s Prost with her husband Austin.

In late 2018, five years after opening as a food truck, Prost moved into a lively restaurant/beer garden in the snazzy Revolutsia shipping container–complex of shops and eateries. Inside, Prost gets pretty gemütlichkeit (German-cozy). You’ll find cuckoo clocks, a wall of 316 steins, wooden bench sets imported from Munich’s Oktoberfest, and a market next door with German imports including – at last count – 19 mustards. 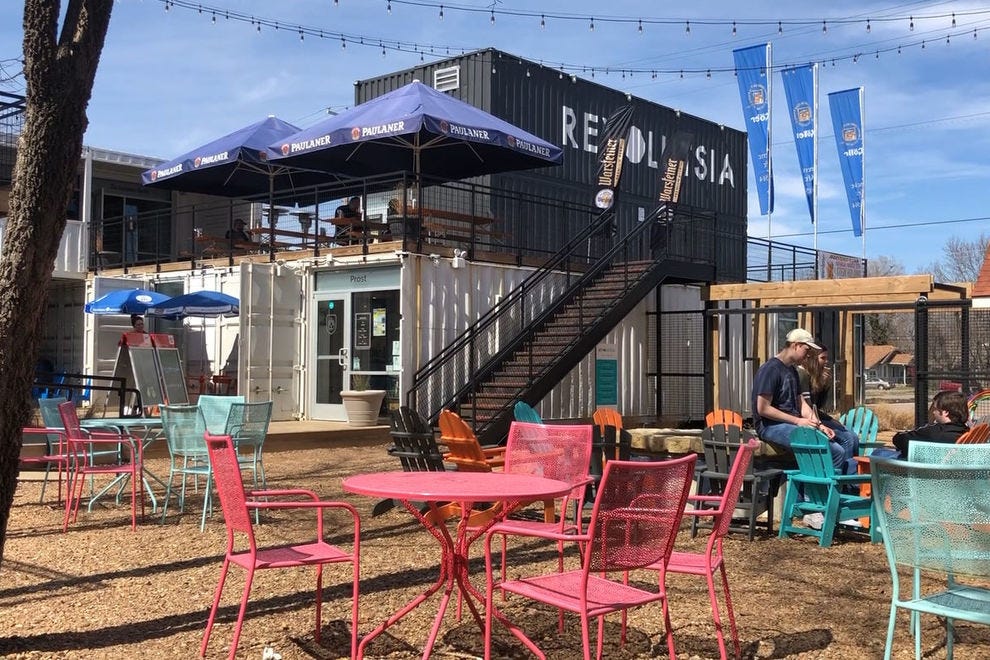 The focus is, Austin says, “the roots of cuisine that’s eaten every day in Germany.” This means lots of tasty bratwurst, frikadellen meatballs, kartoffelpuffer potato pancakes and ample portions of sauerkraut.

And bierocks too, as Prost bakes a delicious morning batch bursting with fresh ingredients to meet the local demand.

When pressed to personify the bierock, Austin pauses a moment, then likens it to country singer Dwight Yoakam.

“You can’t quite put your finger on him,” Austin resolves. “He’s a wonderful musician and actor. (‘Sling Blade’ was great.) He’s not as widely known as some famous people, but in certain areas pretty popular. That’s similar to bierock: an enigma.”

This is largely due to the bierock origin story, seemingly ideal fodder for the next Spielberg epic. 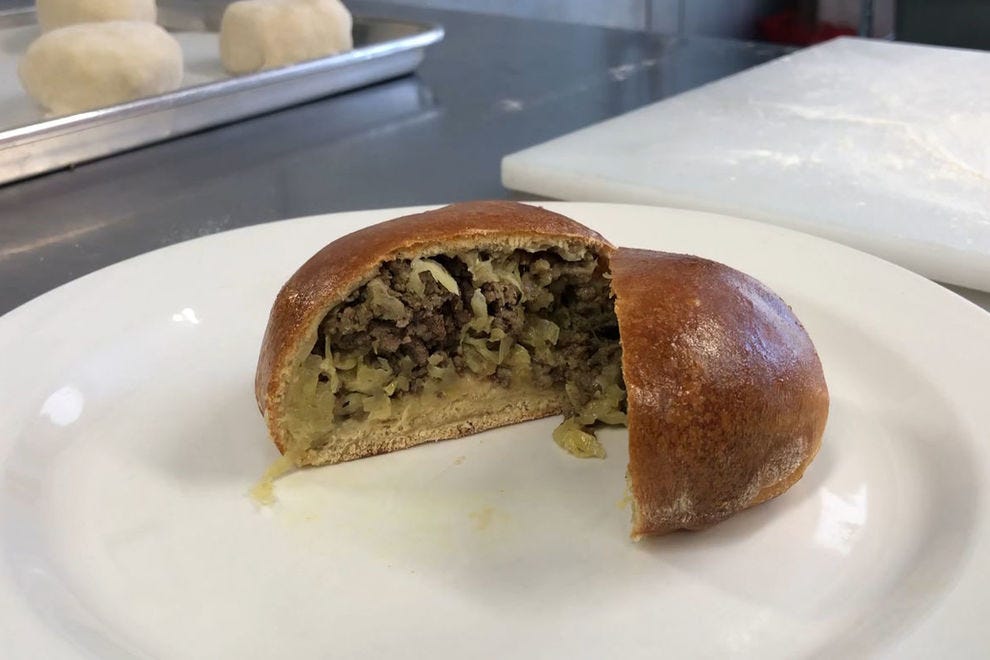 A classic bierock from Prost in Wichita, Kansas — Photo courtesy of Robert Reid

In the 1760s, Russian empress Catherine the Great lured German peasants to settle the isolated steppes off the Volga River in southern Russia. She offered 75 free acres per family and threw in free transport, free religion and no military requirement. Thousands came.

At first, things were pretty hard-knock for these Volga Germans, who contended with freezes, floods and bandits while literally living in holes in the ground. Within 40 years, however, over 100 communities were thriving, along with the emergence of a new farmers’ snack inspired by both Tatar cooking and Russian pirozhkis: behold the bierock!

Once Catherine’s promised privileges started to fade away – capped when the Russian military began drafting Volga Germans in the 1870s – many headed to Kansas and Nebraska instead. (Others were later shipped to Siberia by Stalin, some eventually settling into Kazakhstan.)

As a result, the bierock makes up a daily part of the Kansan diet. You can detour to get one at German bakeries in Newton or Hays, home caterers in St. Francis, or fancier restaurant in Paola outside Kansas City. Up in Nebraska, they’re known as the runza; a local chain there sells thousands during Nebraska Cornhusker football games.

Wichita is a city of 400,000 on the plains with museums and trails along a nice patch of the narrow Arkansas River (pronounced “OUR-Kansas”), record-breaking big grain elevator murals, and a Frank Lloyd Wright prairie-style home.

It may not be the capital of Volga German Kansas – that’s found in Ellis and Rush counties – but it’s certainly the world’s biggest city where you can hear locals talking about bierocks (even when not eating them). Wichita even has a bierock drive-through stand. 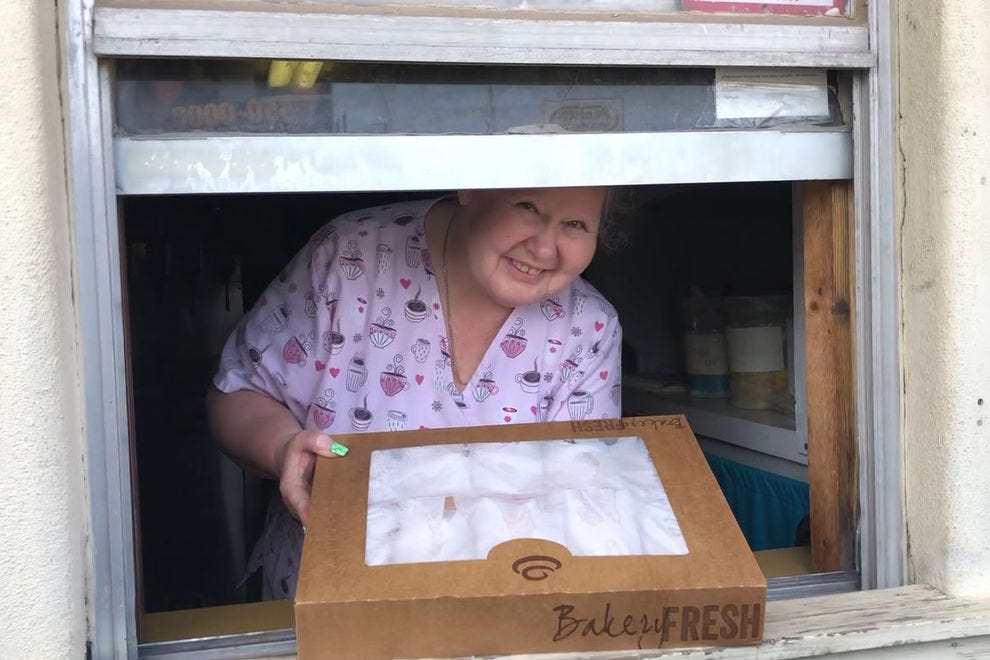 At M&M Bierock, hungry patrons can drive up and get a box of fresh bierocks passed through a drive-thru window — Photo courtesy of Robert Reid

M&M Bierock, a few blocks from Prost on Central Avenue east of downtown, has occupied an old taco shop since 1974. Mary Morain, who has run the shop since 2006, grew up in Wyoming and didn’t even know about them until 1989. Now she makes up to a few hundred a day for drive-through regulars.

“It’s just an awesome food,” she says. “They’re so easy. You can eat it on the go, you can freeze them wonderful. You can do anything with the bierock.”

Inside, Mary works with Melody Greenup, a Green Bay Packer fan who likes to fashion her bierocks into football shapes. “I had my first bierock when I started working here in 1977. This is like my home now,” she says.

The two work over a makeshift assembly line of plain brown bags which sits below a chalkboard that reads “I love you guys.” Next to them is the oven, where racks of huddled bierocks slowly bake. They come “traditional” – that is filled with beef, onion, cabbage, spice – or filled with ham and cheese.

For many customers, the appeal isn’t just taste, Mary notes, but a hearty dose of nostalgia, too.

“We have people drive up and say they just came to get the smell of grandma’s house,” Mary says. “Then they get some.”

Hmm. Ever wanted a Volga German grandma? When in Wichita, anything’s possible.

Just say the word. (You know which one.)

The fall foliage in New England is set to be remarkable – and early
4 Developments From Champagne, Heading Into What’s Typically Their Most Lucrative Season
The list of countries where travelers can go live and work remotely is growing
Hong Kong Disneyland set to reopen for a second time while California parks remain shuttered
Your guide to the best places for fall colors this year