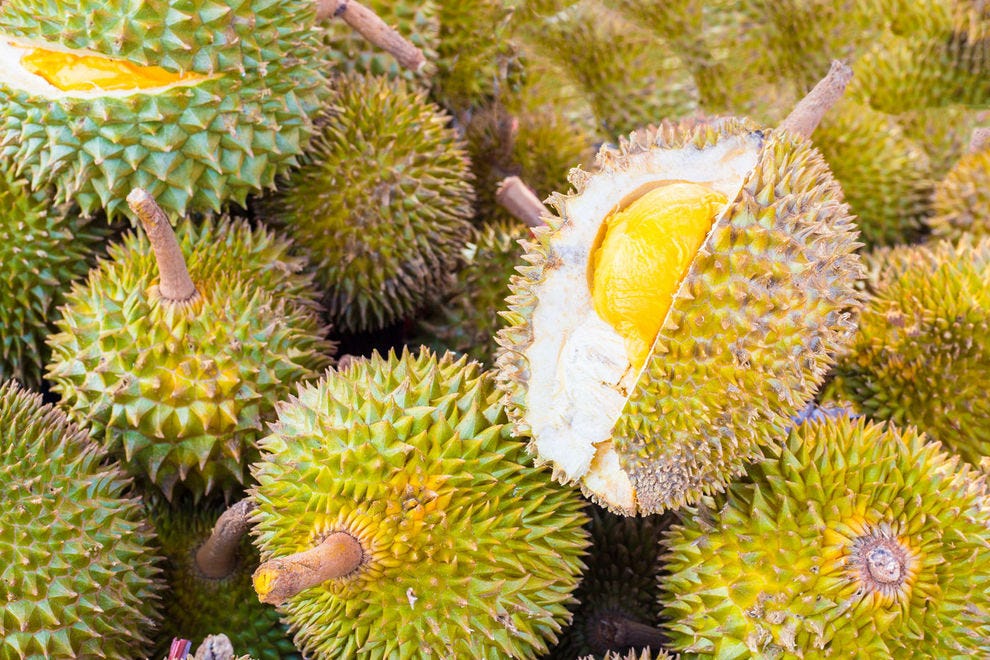 The aroma of durian – one of the most polarizing foods in the world – is hard to pin down, but here are some attempts people have made: Limburger cheese, gym socks & turpentine, New York City’s hot summer garbage, and pig droppings.

Anthony Bourdain once said that after eating durian, “Your breath will smell as if you’d been French-kissing your dead grandmother.” Countries where it’s commonly found have banned it from public spaces, as even just a single fruit can turn the air within entire hotels and airports rancid.

But against all odds, a passionate group keep on cultivating, serving and consuming it. Are they seeing (and smelling) something the rest of us aren’t? Here’s everything you need to know about durian, the world’s truly forbidden fruit.

Durian, called the “king of fruits,” is a tree fruit primarily found across large swaths of Asia. There are around 30 individual species of Durio, and hundreds of varieties in just Thailand, Malaysia and Indonesia.

Not all types of durian are edible, but of the fruits that are, they largely share common characteristics like thorny exterior rinds that range from green to pale brown. They look a bit like much smaller jackfruit, but differ in that they generally max out between 5 and 7 pounds.

Unlike the texture of jackfruit – which can resemble pulled pork – pale white or orangey durian flesh is downright creamy; imagine reshaping a stick of room temperature butter by cupping it within the palms of your hands.

The taste continues along this motif. It’s described as custard-like, resembling buttercream or silky almond paste. Its high sugar content even means that vintners are able to turn the flesh into wine.

So it’s a Dr. Seussian spiky ball of flan that grows on trees. What’s so awful about that? An old adage about the fruit sums up the conflict inherent within; they taste like heaven and smell like hell. Yes, durian draws its despicable reputation from its uniquely polarizing scent. And man oh man, what a scent it is.

The palette of compounds are, on their own, responsible for creating the smells associated with roasted onion, garlic, rubber, cooked beef, leeks, honey, metal, dried squid and yeast. And while each of these genetic triggers are positively interpreted on their own by the human nose, they form a perverse sort of gastronomic Voltron when they combine to form the durian genome.

The science behind incredibly aromatic fruit actually makes a great deal of sense. The survivalist goal of fruit is to be consumed, its seeds transported along the way, in the hope that they’ll find fertile new ground to take root and multiply.

The math on durian’s powerful aromatics may add up to something revolting in most human noses, but that’s not necessarily the case for the elephants, monkeys, tapirs and birds that gorge themselves on the trees. In that way, modern durian is the product of a brilliant evolution.

Durian bans are the real deal across many parts of the world where the fruit grows. For example, it must be disposed of or consumed before passengers enter the Singapore Metro system, unless they want to pay a $500 SGD ($380 USD) fine. A similar ban exists across Bangkok public transportation.

A single durian smuggled into a hotel room can make the room unsellable for up to a week, even after a deep clean. The pungent aroma lingers long after the fruit is gone, and the slow process of aerating fibrous carpets, linens and even walls can’t be accelerated.

Durian compounds leech into every porous surface they come in contact with, wreaking havoc upon large spaces moving air via HVAC heating and cooling systems.

Curiously, the only truly effective odor neutralizer for durian is the husk of the fruit itself. Washing your hands with the husk is said to draw the scent right back out. But extrapolating that process out across subway cars or airport terminals is impossible.

Finally, if you’re hellbent on trying the forbidden fruit for yourself, keep this in mind: A 2009 study examining a piece of old Asian folklore linking drinking alcohol while eating durian with exploding stomachs had some surprising results.

Durian in fact nearly eliminates the human body’s ability to use the enzyme aldehyde dehydrogenase (ALDH) to combat the toxic byproducts of alcohol metabolism. So, boozing it up while scarfing down durian won’t make you pop like a balloon, but it very well might kill you with enough practice. Thanks science!

How to holiday on your own with kids – a guide for first-time dads
BEST CHRISTMAS DAY EVER!
Supplements Complementing Functional Food Are Attracting Investor Interest
USA to require negative COVID-19 test for all arriving international travelers
Feed your nostalgia with these classic desserts