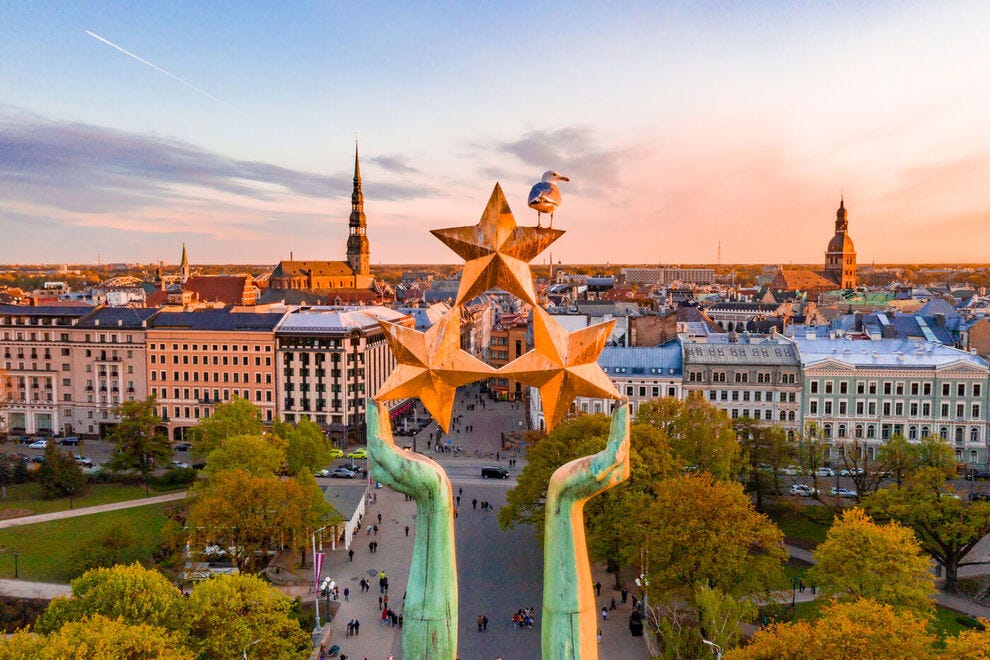 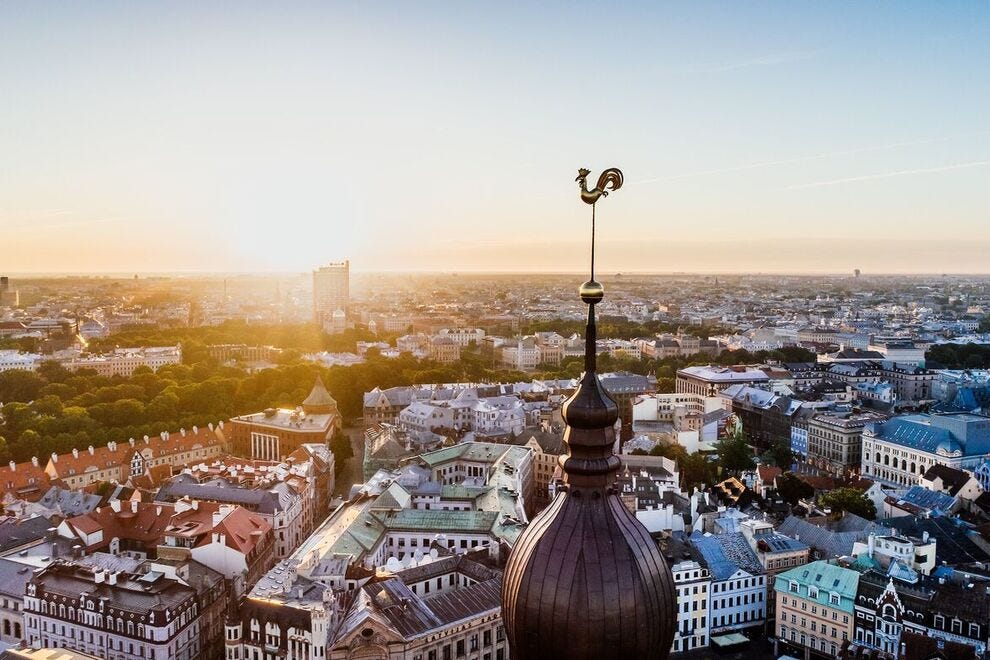 Riga, Latvia’s capital city, ranks as the largest of the three Baltic capitals – a hub for Gothic and Art Nouveau architecture, UNESCO World Heritage charm and a cool, modern edge. Explore the city from afar through these 20 photos. 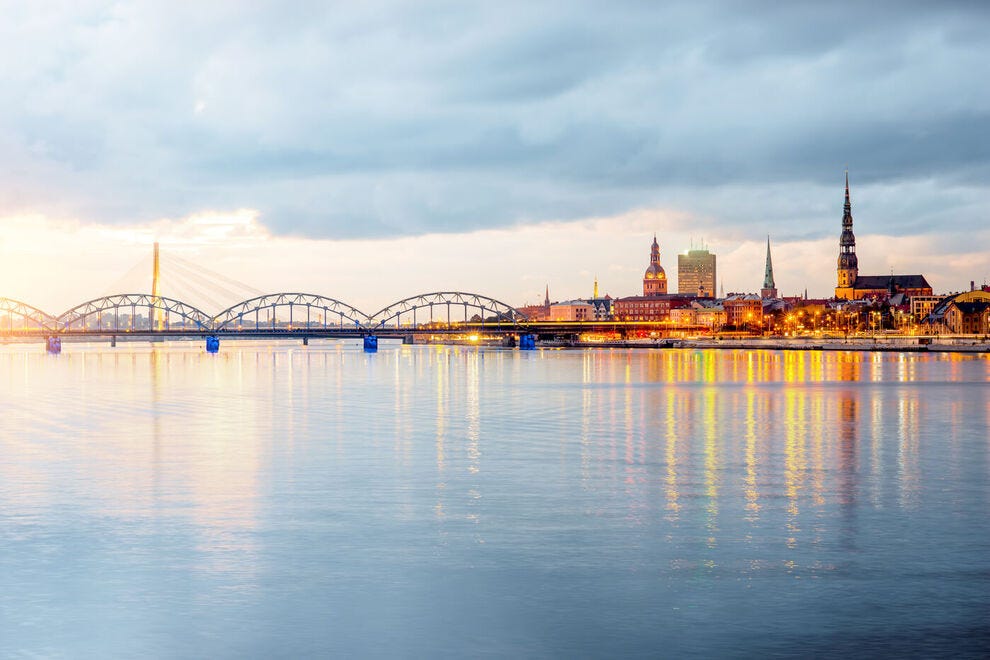 The Daugava River passes through the heart of the city before emptying into the Gulf of Riga on the Baltic Sea. The river has long been an important trade corridor – there’s still a railway running along its northern bank. 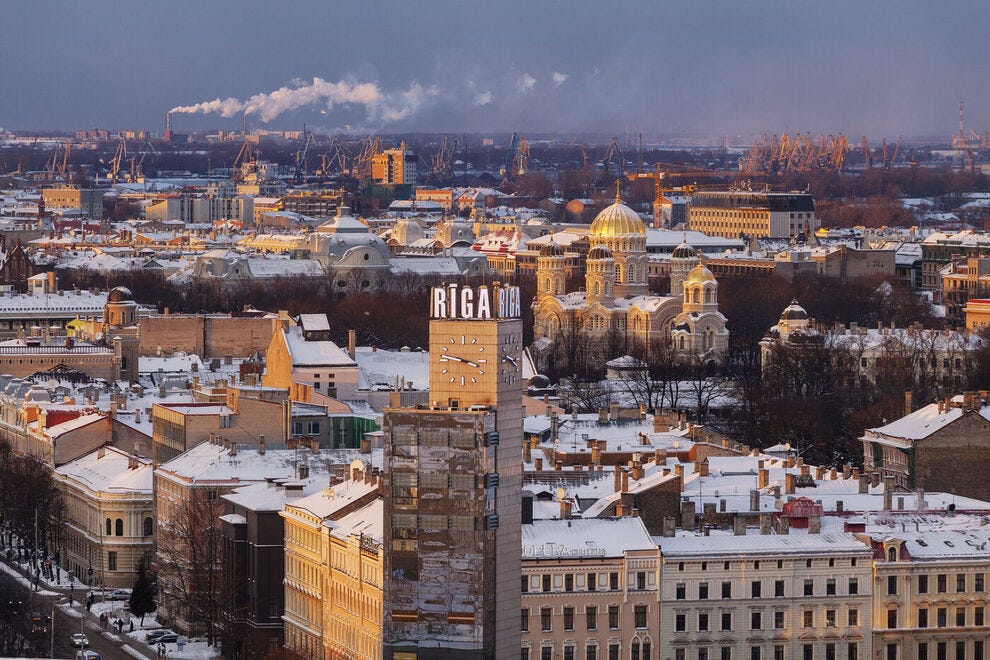 Riga’s history dates back some 800 years to its founding in 1201. The city has seen its fair share of tumultuous history, including periods of German, Swedish and Soviet rule. Latvia gained its independence from the Soviets in January 1920 but was later re-occupied. The nation reinstated its independence in 1991. 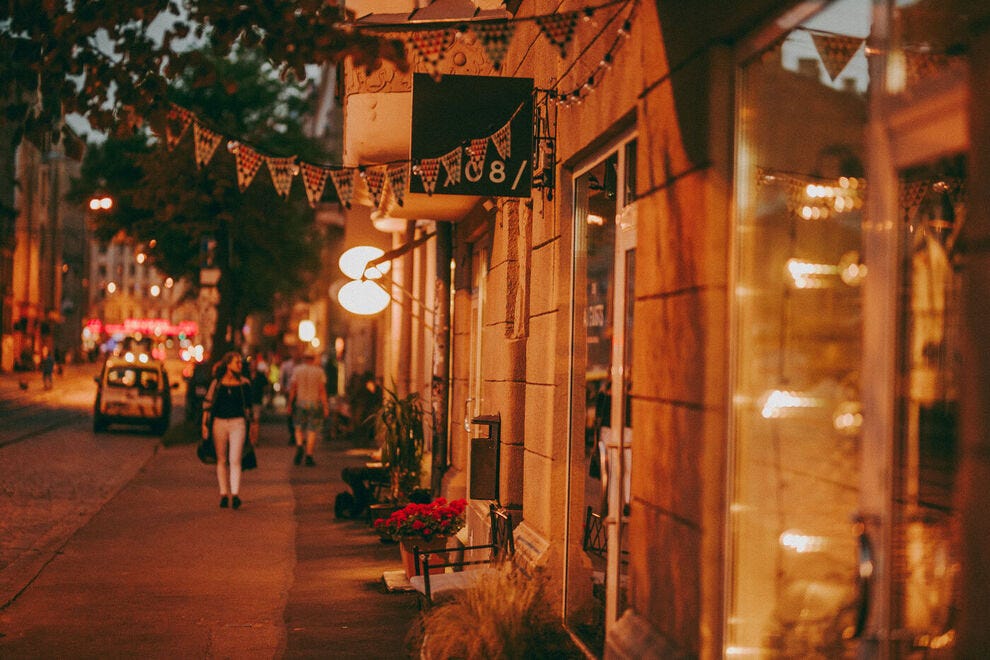 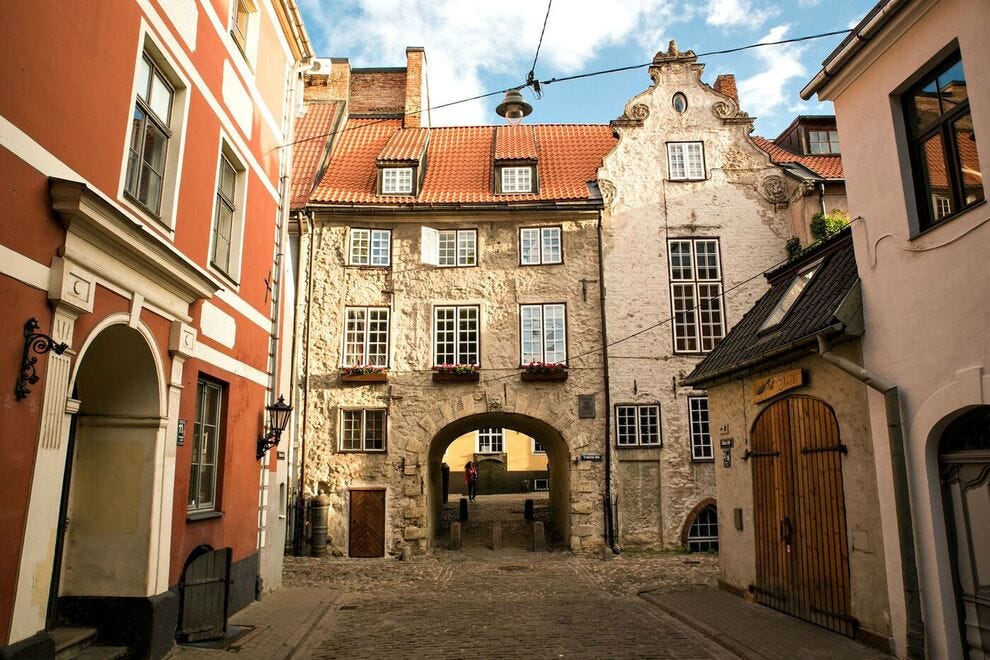 Local lore tells that the apartment above the gate once belonged to the city executioner, who’d put a red rose in the window the day before an execution. 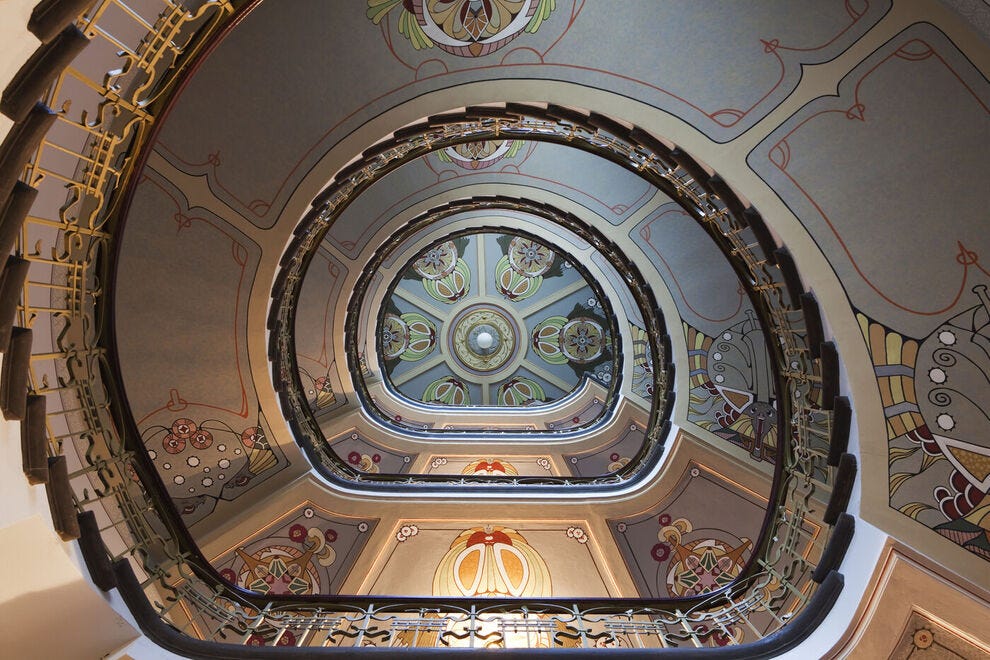 When Art Nouveau came into fashion near the turn of the century, Riga was at the forefront of this architectural trend. Today, it’s considered the Art Nouveau Capital of Europe. As many as one third of the buildings in the city center follow the style, giving Riga the highest concentration of Art Nouveau architecture in the world. 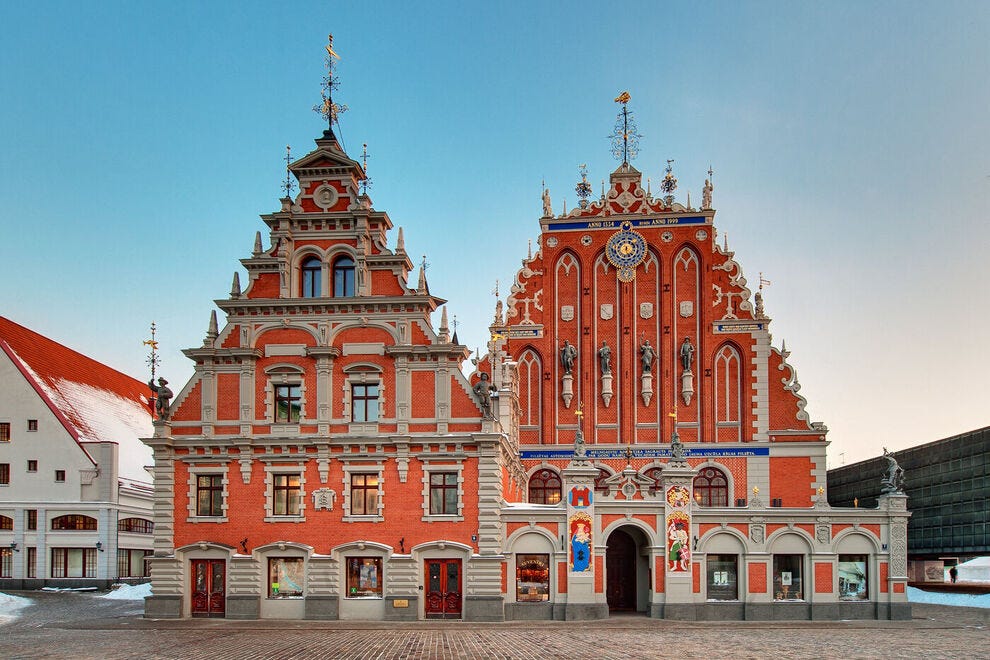 House of the Blackheads

Built in 1334 as a banquet hall (and rebuilt in 1999), the House of the Blackheads is one of Riga’s most impressive structures. The Dutch Renaissance façade faces Town Hall Square. It gets its name from the Brotherhood of Blackheads – a social organization for unmarried men known for throwing wild parties. 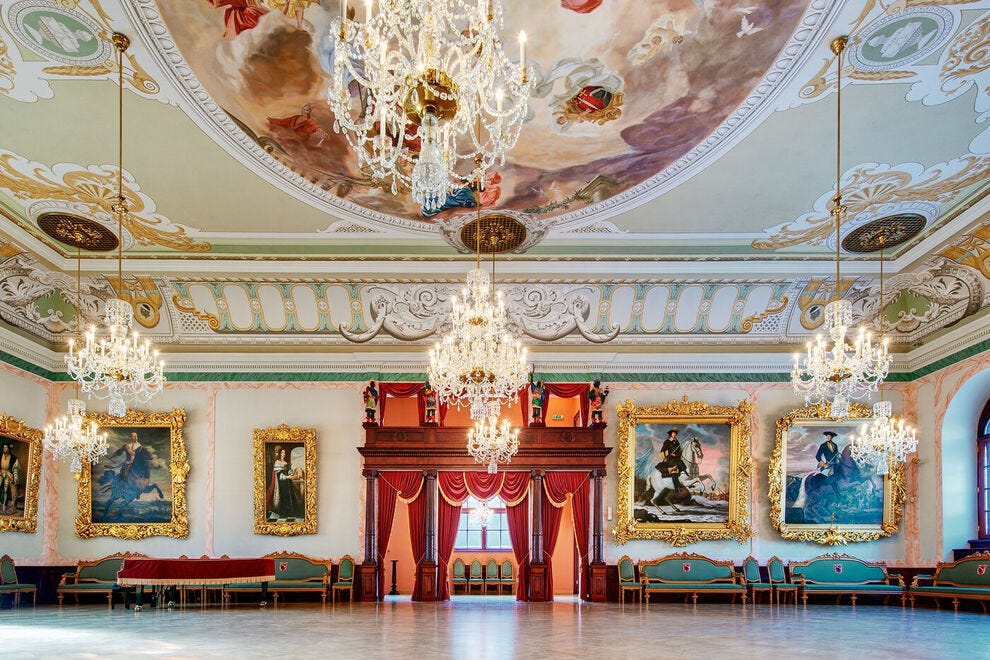 Inside the House of the Blackheads

The interior of the House of the Blackheads is equally impressive. Tour the building to see its crystal chandeliers, painted ceilings, 19th century replica furniture and various items that once belonged to the Brotherhood. 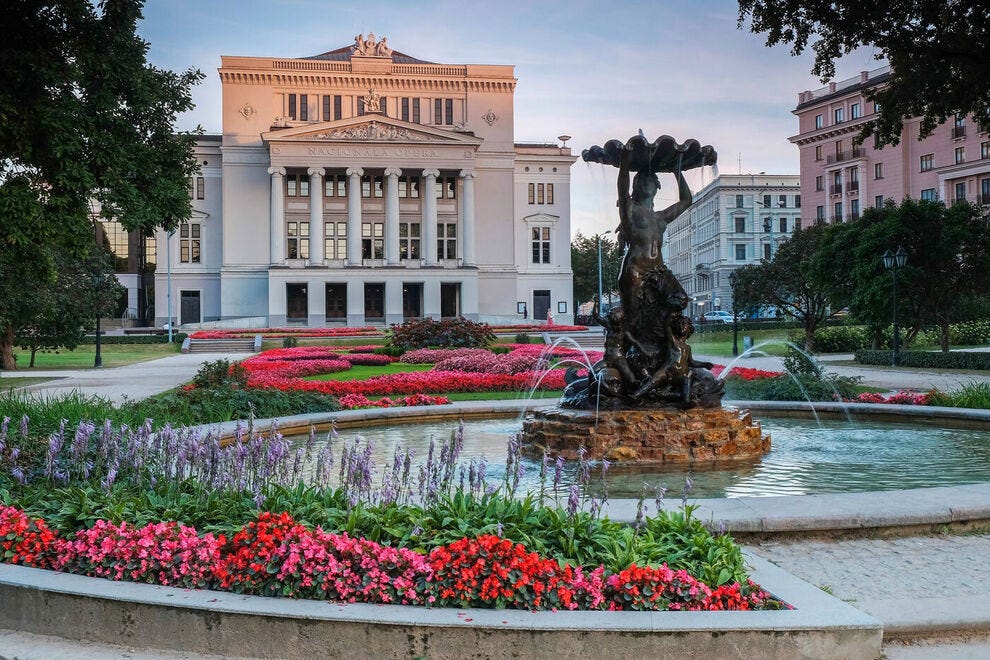 The building that now houses the Latvian National Opera and Ballet opened in 1863 as the Riga City Theatre. Each year, the stage plays host to five new opera and ballet productions – a mix of classic and contemporary.

The granite and copper monument that towers over Riga symbolizes Latvian statehood. Often called the ‘Latvian Statue of Liberty,’ the Freedom Monument stands around 140 feet tall and is topped with the copper figure of a woman holding three gilded stars. 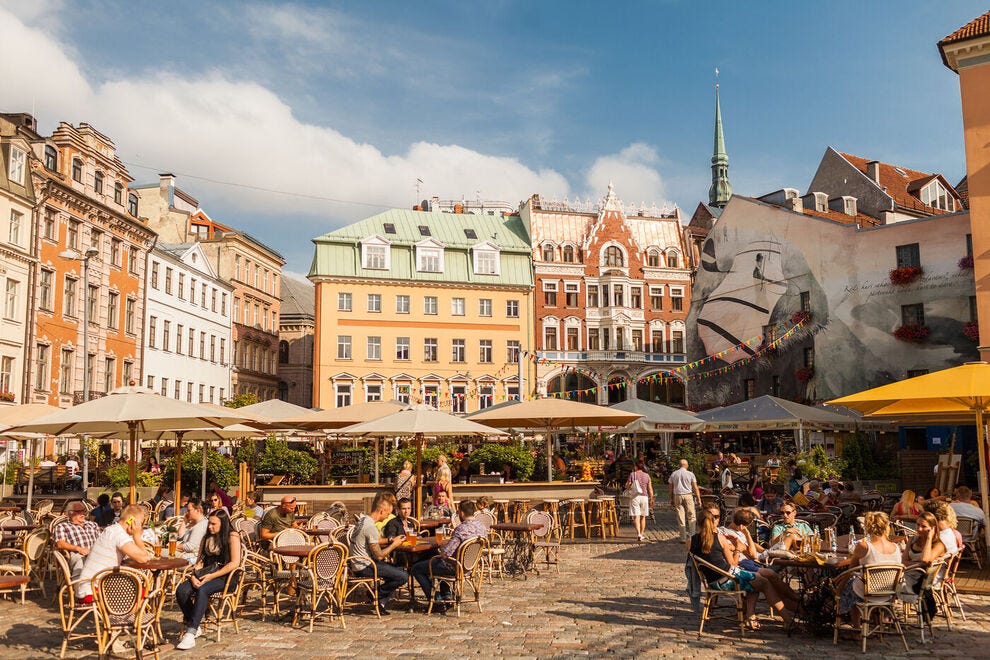 The historic center of Riga, designated as a UNESCO World Heritage site, was once a major trade center of the Hanseatic League. These days, it maintains its historic charm, thanks to its cobbled streets and numerous architectural gems. 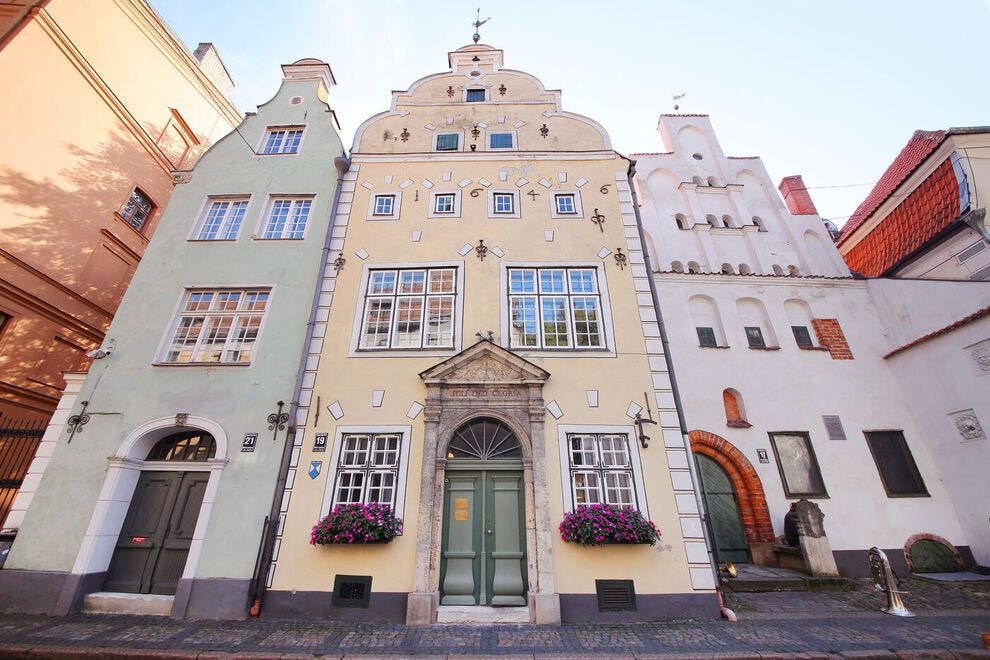 Three of the oldest (and most photogenic) buildings in the old city are called the Three Brothers. Legend has it that three men of the same family built them. The medieval buildings date back to 1490, 1646 and the late 17th century respectively. 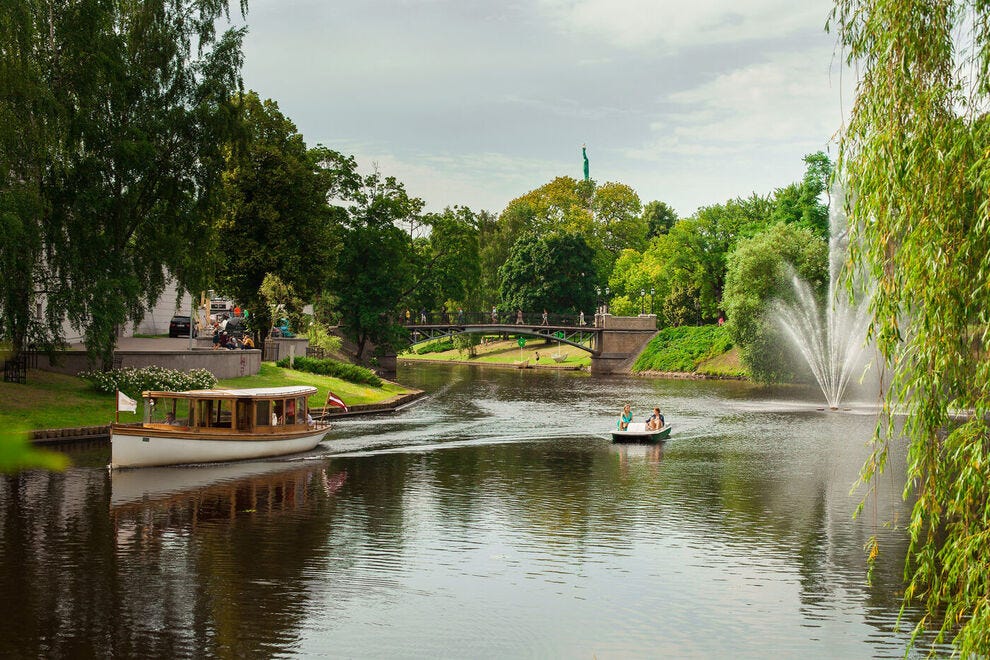 An old moat that once protected Riga’s medieval walls now serves as a charming canal that winds its way between the old town and Central Riga. Boat tours take visitors along the canal and Daugava River, past some of the city’s most prominent sights. 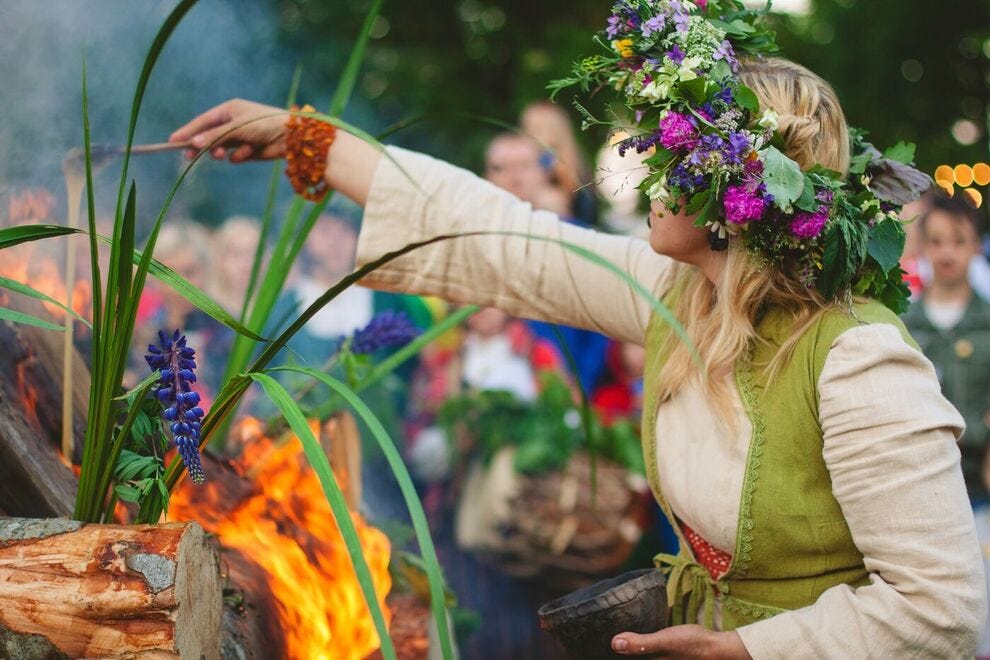 One of Latvia’s favorite holidays is the summer solstice. The festivities take place on the night of June 23 to June 24 and include making wildflower garlands, drinking beer and eating caraway cheese, visiting the sauna, and leaping over a bonfire. 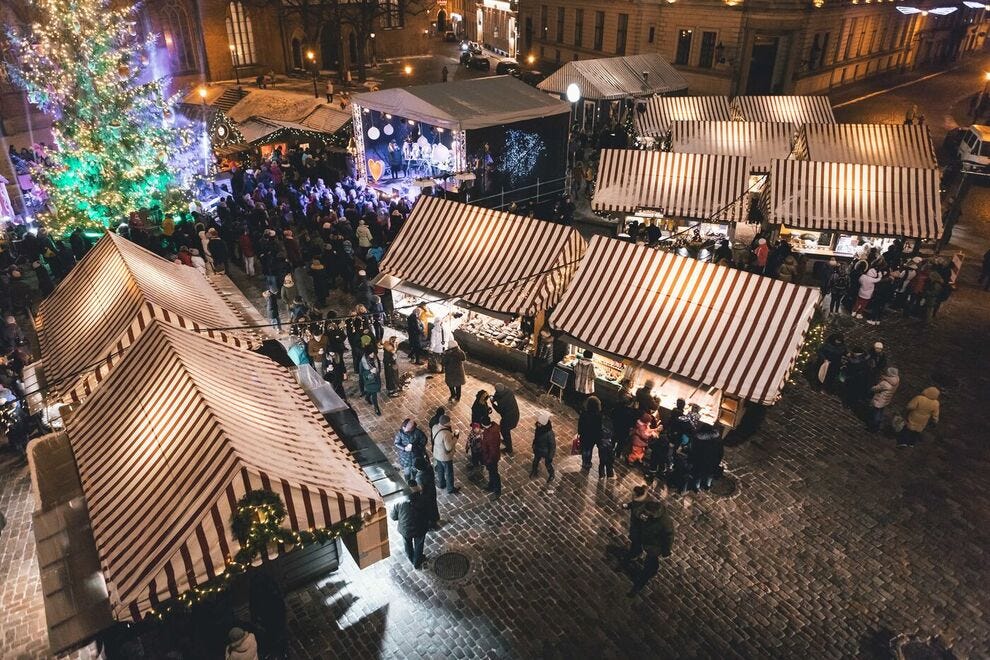 Riga in the wintertime means Christmas markets. The market at Doma laukums ranks among the city’s best, complete with the wafting scent of gingerbread and mulled wine. Stalls in the market sell a variety of crafts, including wool clothing, wooden toys and ceramics. 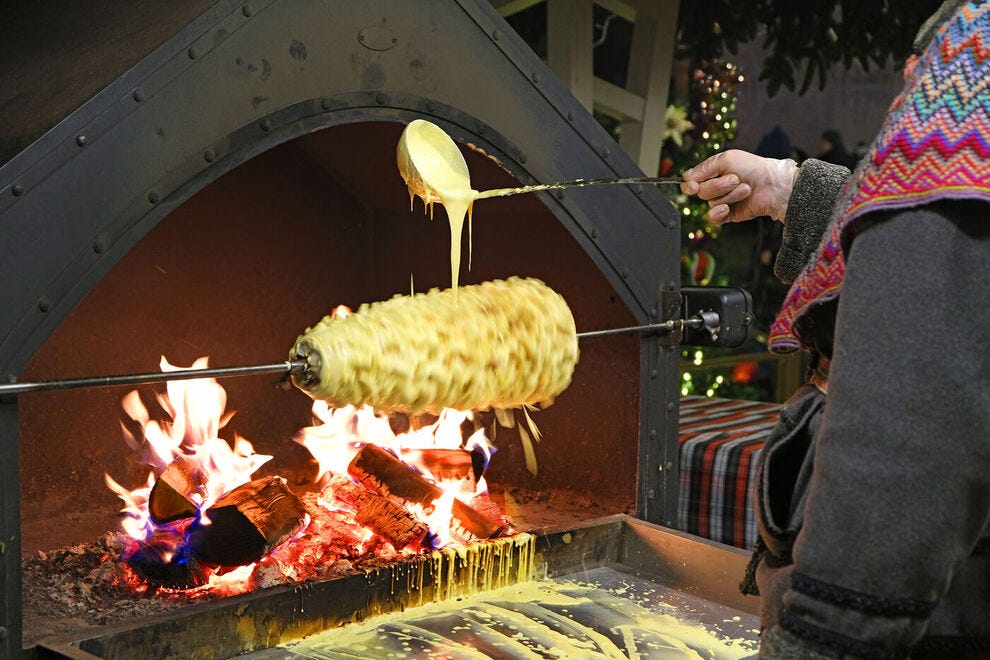 Visiting the Christmas market is an excellent excuse to sample some local foods. A favorite is called sakotis (“spiked”) or raguolis (“branched”), or a Lithuanian tree cake in English. This treat is made by dripping a batter onto a stainless steel rod that rotates above a heat source. The dripping batter forms spikes that look like the branches of a Christmas tree. 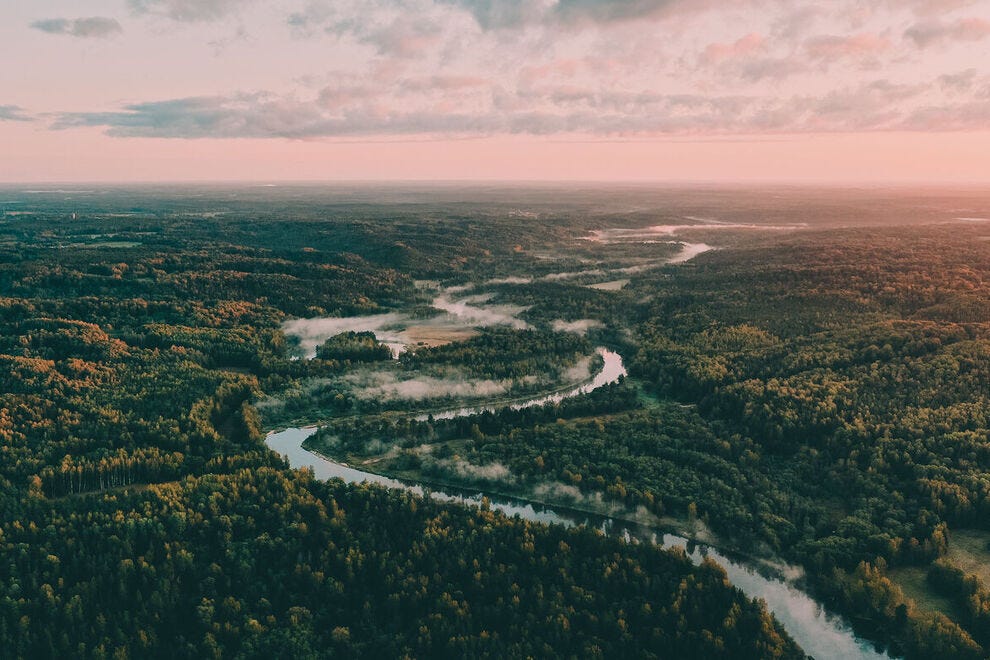 In addition to being a worthy destination in its own right, Riga also serves as a base for exploring Latvia, with several excellent day trip options nearby. One such destination is Gauja National Park – the oldest and largest national park in Latvia. 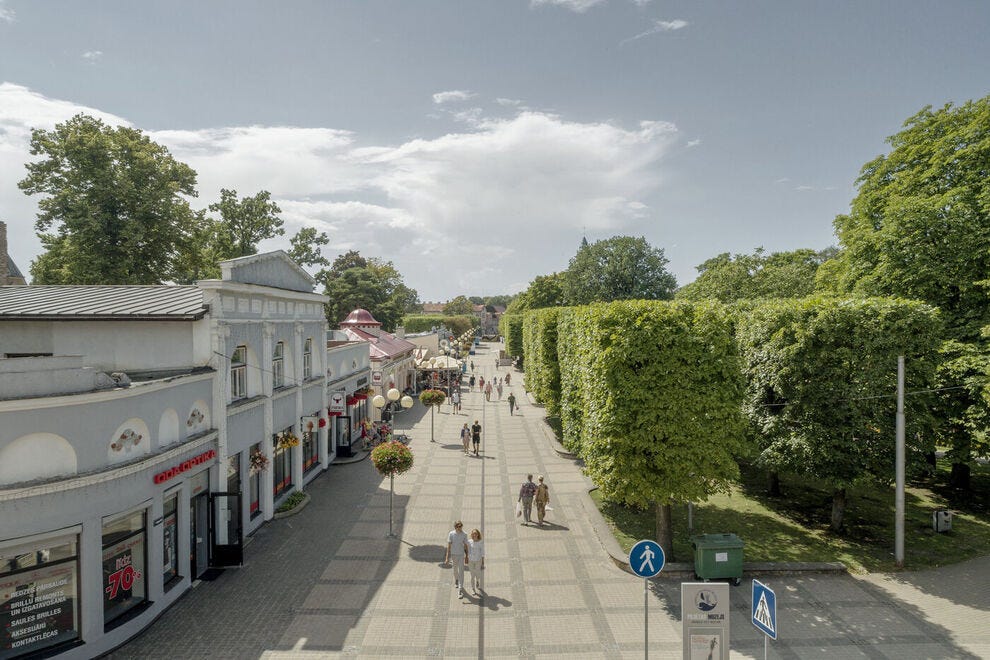 During the summer months, locals flock to the seaside resort of Jūrmala for fun in the sun. Jomas Street, a pedestrian street in town, is one of the oldest and most popular areas of town. 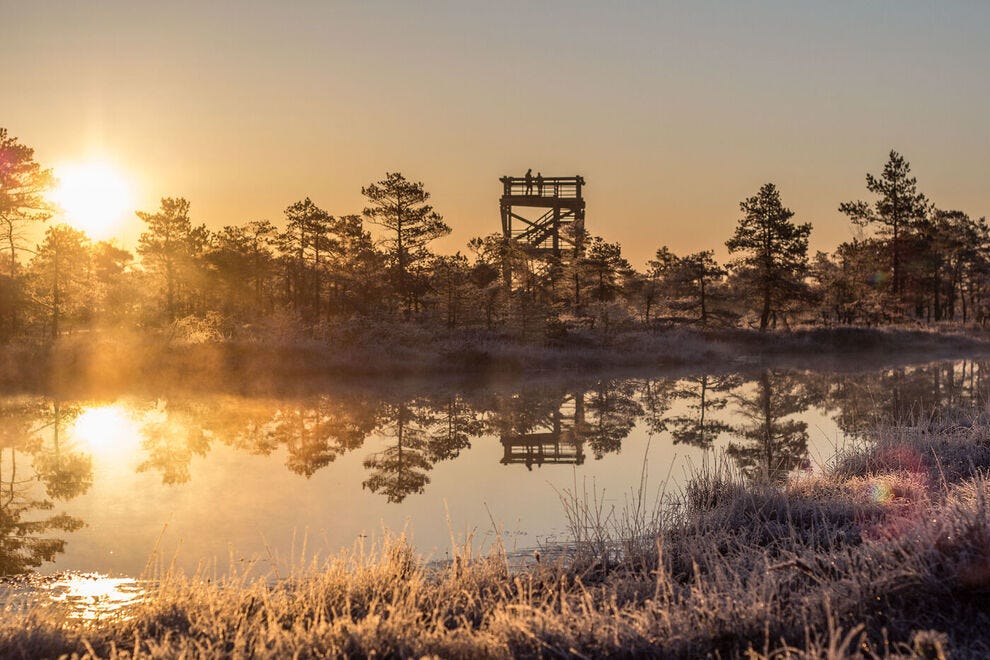 If you can tear yourself away from the beach, head to Kemeri National Park. The Great Kemeri Bog Boardwalk leads visitors past pools, lakes and areas of moss and pine trees for the chance to spot several bird species.